Applying my lessons from the Road

At Road to CA, I took several classes, and on this little denim quilt I was able to put some of it to actual use.

One of my first classes was with Angela Walters, called Beyond Feathers.  This is my take on her designs. 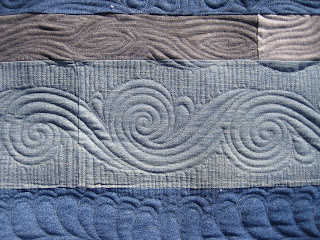 Waves and swirls, with straight lines to set it off.  Also my attempt at wood grain, which would look better had I SID.  Yep, it seems SID  is necessary even on a picnic type quilt. 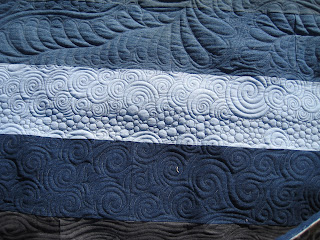 Large pebbles, concentric circles and swirls.  I found that large pebbles were much more difficult for me than small ones. 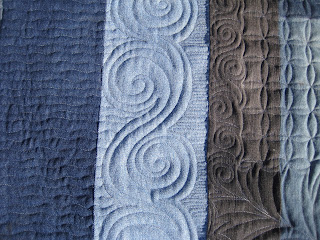 And another swirl design designed by Angela.

A class from Dawn Cavanaugh was Feathers as Fillers.  Here is what I did with that. 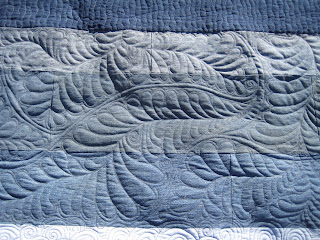 I had so much fun applying my lessons, and seeing them stitched out was encouraging to me.  The samples I stitched out in class did not look good, most of them looked pretty bad.  I struggled with this for a bit, then I decided that it was due in large part to using different machines that I was not familiar with, and a learning curve.  Either way, it was good to get home and stitch them out with success.

Thanks for stopping by, I appreciate your company, and your comments.

Esther
Posted by Esther at 3:34 PM