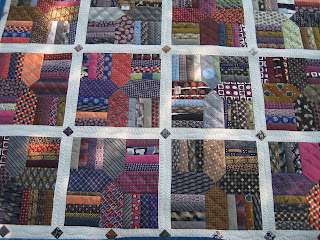 Well, the tie quilt is almost finished. (finally) I am stitching the binding, sleeve and label, and then I will be taking this quilt to my brother later this week.

So, some thoughts and facts behind this quilt.  A year ago (June 27, 2011) my brothers partner, David passed away.  David was a  pulmonary specialist in the Bay Area, and also an accomplished cello player.  The bag full of ties were David's.  My brother (Dan, he does have a name after all) asked me to make a quilt out of the ties, and he wanted to give the finished quilt to David's sister Joanie. That is how this all started.

While blogging about the process of this quilt, I received many comments, the most thoughtful and profound one for me was, "Picture all of the people he helped while wearing the ties."   Wow, this comment gave me a whole new perspective.  My original thoughts on this project were all the memories the ties held for my brother.  Were they gifts, bought on a shopping trip, bought while traveling, worn to a special event?  That kind of thing.  I never thought about how many people were helped while David was wearing these ties.

I do go on and on, but after months of this project I have many thoughts.  One of them was what to call this quilt.  I went round and round and ended up with,  "David's Ties".  That summed it all up.

Now for some pictures of the almost finished quilt. 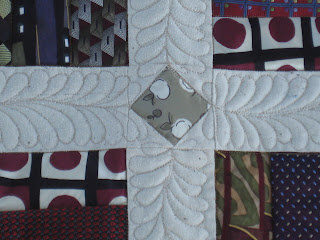 The setting squares were made from bow ties.  I did feathers in the raw silk sashing, and in the blocks I did mostly stitch in the ditch, and a simple geometric design on the large tie shaped pieces that formed the center of the block. 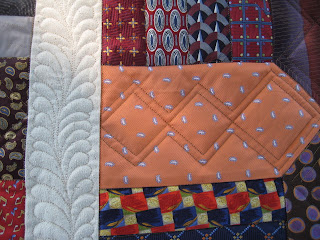 Because of the prints and all that is going on in the blocks, you don't see the quilting very well, but you sure see it on the back. 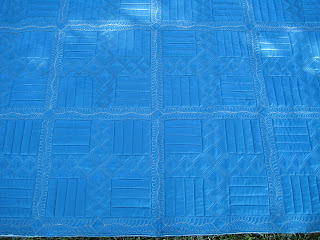 I used Silk Radiance for the backing, and it is just beautiful.  It actually is a teal color, (this blue is just a trubute to my great photography skills.) I am so pleased with this quilt,  it is 74" square, a nice generous size.  There is a bit more I want to tell you about this project, but some of it is a surprise to my brother, so I will wait until I deliver this and show him first.

Thanks for sharing my journey and progress, it is appreciated.

Esther
Posted by Esther at 5:13 PM